“Stories are only knowable though some form of communication. Narrative refers to both the story, what is told and the means of telling.” (Potteiger and Purinton, 1998, pg 3.) Narrative is expressed though story (content) and telling (expression). It refers to spoken or written accounts of connected events. Our whole world is influenced by narrative, as time goes on we use our experiences and our actions to negotiate our way though life. There are several different ways in which artists, directors, curators, designers etc. incorporate narrative into their designs, novels, film, art, architecture, dance, photography, tv, media etc.

English architect Nigel Coates is famous for integrating Narrative into his work. He believes that the environment always communicates; “A financial centre – the City of London, or New York – expresses its economic power through its glossy tallness as much as derelict buildings disclose their story of decline.” (Coates, 2012, pg 13.) No building or city doesn’t communicate, they all have stories to tell. His work is evidently influenced by this. For example in his expressive piece of work for exhibition global cites at the Tate modern in 2007, he uses everyday objects to communicate the narrative of the buildings in London, through an artistic eye. “ Architects can’t make one to one sized exhibits in a gallery. It’s kind of out of the off board – but you can make a reference to the city in a very open way.” (Coates,2007, no page.) He uses objects such as bourbon biscuits and toy buses to display the spatial narrative of architecture in London in a playful yet inventive way, the colourful details invite the user in to interpret the artwork with no boundaries. The narrative of the architectural city can be explored in a non-intimidating way to the public. 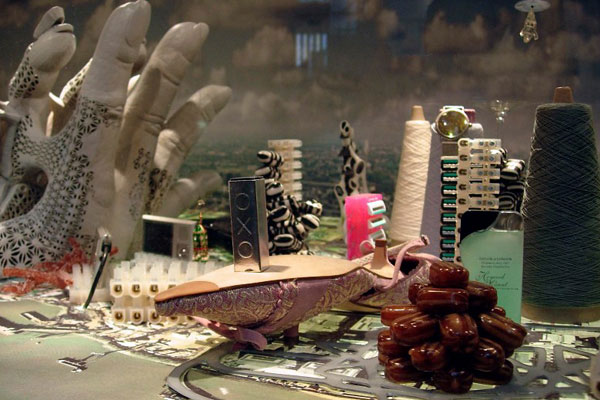